View Larger Map
Norwegian Elkhound Females
There are 25 images in this slideshow of Tekla, Tuva and their mother Kamp, enjoy!
Canada's Premier Elkhound Females
Training Camp
Off Leash Training Expedition
Kamia Kennels Training Ground
Norwegian Elkhound Family
Centuries Old Instinctive Bonds
Norwegian Elkhounds Have Strong Pack Mentality
Perfect Conditioning
The finest hiking dogs in the world
Hike today was roughly 10 kilometres in tough winter mountain terrain
This Is What They Love
The females survey the landscape
Tekla, Kamp and Tuva
Mountain Hiking Elkhounds
Keeping up with these girls is quite the feat!
These are superb ranging dogs, luckily they wait for me
Scouting Ahead For Me
Centuries of hiking these regions in their blood
Incredible Outdoor Companions
Checking In
Kamp is an experienced mountain dog
She knows it's time to check back
Always Aware Of My Presence
Ancient Elkhounds Solid As A Rock
These Are Some Serious Elkhounds
Related Dogs Are Amazing
Nothing Compares To Hiking With A Mother and her Daughters
These Are Outstanding Norwegian Elkhounds
What a Great Day
This is an awesome spot up here
These girls are super hiking companions
Norwegian Elkhound Females
We Work Our Dogs In Rugged Mountain Conditions
These Three Excel Out Here
Norwegian Elkhound Kamp
Kamp is a big stout female, 60 plus pounds of muscle
She looks across the range she roams
Twins Tekla and Tuva
It's a workout for these girls out here
These two are in fantastic shape
Tons of Stamina
Few breeds could follow these girls out here for the day
Don't kid yourself, I am going to sleep sound tonight, 9 kms on snowshoes, uphill, go figure!
Pretty Cool
Kamp, Tuva, and Tekla!
What a great day
Stunning Elkhounds
What An Incredible Trio of Norwegian Elkhounds
Kamia Kennels Breeding Females
Kamp and her girls
Kamp is a proud Moma, she has done an amazing job
Kamp gives these girls a ton of guidance
Kamp, Tuva and Tekla
Tuva has a slightly dark mask than Tekla
Tekla is a few pounds heavier than Tuva
Who Is Who
Tekla left, Tuva, Kamp far right
All 3 Are Amazing - Ancient Instincts Are Preserved Intact
Remote Terrain Dogs
The Twins Are Superior Remote Terrain Hiking Elkhounds
You will not find better instinctive Elkhounds
The Twins Check In
Instinctive Behaviours Reside In These Two Without Question
These Two Have Hiked This Region With Me Since Day One Off Leash The Entire Time
Kamia Elkhounds
Canada's only full working lineage of Elkhounds
These my friends are Elkhounds
Tuva Kamp Tekla
Try To Find Closer Dogs, It's Not Possible
You Can't Beat Related Dogs
Check It Out
Go Anywhere You Want in The World
You Will Not Find 3 Better Norwegian Elkhound Females
Previous Next
About Us Contact Us
Call : 250-442-5856

Two young foundation females that will lead the way for Canadian Norwegian Elkhounds.

I am planning a litter for Tekla and Jaegar when she cycles spring of 2018. There are 25 images in that slideshow above, be sure to click through and view all.

We have folks speaking for the pups now, so please if you have waited for the litters from these two, please contact us now!

Our full contact details are here!
More about Kamia Kennels

Featured Articles and Information on Tekla and Tuva 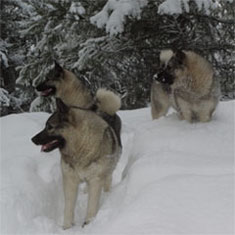 We recently put a new article up on the history and features of the Norwegian Elkhound. Be sure to check it out. 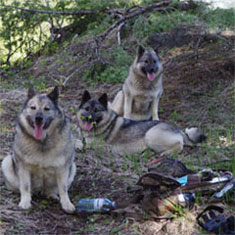 April of 2016 I did an awesome hike with Tekla, Tuva and Tora. I was testing out my new step tracker and GPS phone I got. 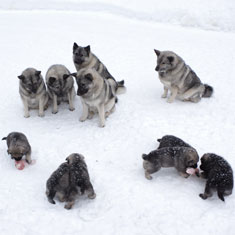 I have litters planned for Tekla and Jaegar in early 2018. These two are going to have some truly awesome young pups. 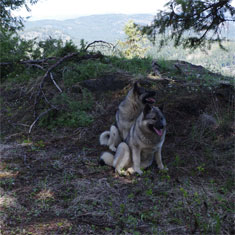 I finally got around to sharing my experiences and thoughts on raising two Elkhounds, or Elkhound siblings. This is a great article.

One of the oldest family oriented dog breeds is the Norwegian Elkhound.

History dates back thousands of years on the Elkhound.

Tekla and Tuva come from a long line of ancient Elkhounds. These are personable Elkhounds, highly intuitive to the handler. For a family dog you want a very intuitive breed, a dog that can work with you and in tune with you and the family. Elkhounds are extremely smart and with this intuitive skill they are so nice to train and work with. Tekla and Tuva are from a very strong working lineage, real high end hunting backgrounds. Some of the very best Norwegian Elkhounds in the world are in the background of these two, so the range of skill they have is incredible. Working lineages are getting harder to find, especially really good lineages like these two. We are very proud of these two females. Working lineage dogs I find are easier to train, they are not so stubborn. They want to work and please the handler, these instincts are right on the surface front and center. The skill set, the ability to respond to the handler, these things make a big difference for a family. You want a dog that responds and works to please.

Tekla is a few pounds heavier than Tuva.

Tekla is just a little more laid back than Tuva overall and is extremely steady.

Even though both of these females are at the top of the game in all areas, Tekla is just a little more relaxed than Tuva. Tekla will let Tuva handle things like keeping the other dogs out of their pen. Tekla doesn't really care if they come and go into her pen, no big deal she figures. Tuva on the other hand doesn't like it.

Tekla barks more at the deer when they come in the yard than Tuva, in fact Tekla is super keen to let me know they are coming. She lets me know before they come out of the bush, she has an incredible nose. Tuva barks at them as well, but it's always Tekla who lets me know first.

Both of the females will mature out in that 55 pound range, maybe just a little more, and my guess is Tekla will remain at just that 2 pounds heavier all the way through.

I am excited now, as Tekla has had her first litter, 10 Pups, she had them with the Premier big boy, Takoda himself. So I have decided to keep a female, Luna, and a new stud dog as well from this litter, Mr. MÅNE  a fabulous young rascal.

I have a super fat head about all my dogs everyone knows that. But quite frankly a blind man could see that these two twins are spectacular, and now that lineage gets to continue strongly with the two youngsters.

Tuva has a slightly dark masker than Tekla.

Tuva is a little bit more territorial than Tekla, and has just a shade more protective instinctive traits on the surface.

I am always a fan of the territorial protective ability in the Elkhound so I find the traits in Tuva very welcome. I am not a big fan of stray dogs, stray people, etc. so tend to let my dogs run to that protective ability side of the scale a fair bit. If Tuva wants to keep things out of the yard, more power to her. She keeps a close watch on her pen even, she doesn't like the other dogs cruising through her space.

Tuva has the ability to easily work personal protection, it's right on the edge of her fur. I have some highly skilled personal protection Elkhounds and these traits are highly sought. Lots of breeders who don't understand that skill and don't really know the old ways of the Elkhound look to breed that out, not me. That is a key instinctive ability of the Elkhound and we preserve that and keep it intact. You want your child to be safe walking through a park, send her with Tuva.

I want to point out that in terms of skills both of these girls possess equal skill levels in all areas, it's just that some traits come out differently. Traits can be honed with skill training, the closer the trait is to the surface, the easier to hone of course.

I take a great deal of pride in my dogs ability to respond to what I wish them to do. As you can see from all the material on this site about these females and their mother Kamp, all three of them are absolute in their devotion to work with me. I could hike to Alaska and back, these three would know exactly where I was the entire trip, and would guide me safely throughout the trip, gladly taking every measure needed to keep me safe, and each other.

These my friends, these are true ancient Viking Elkhounds!